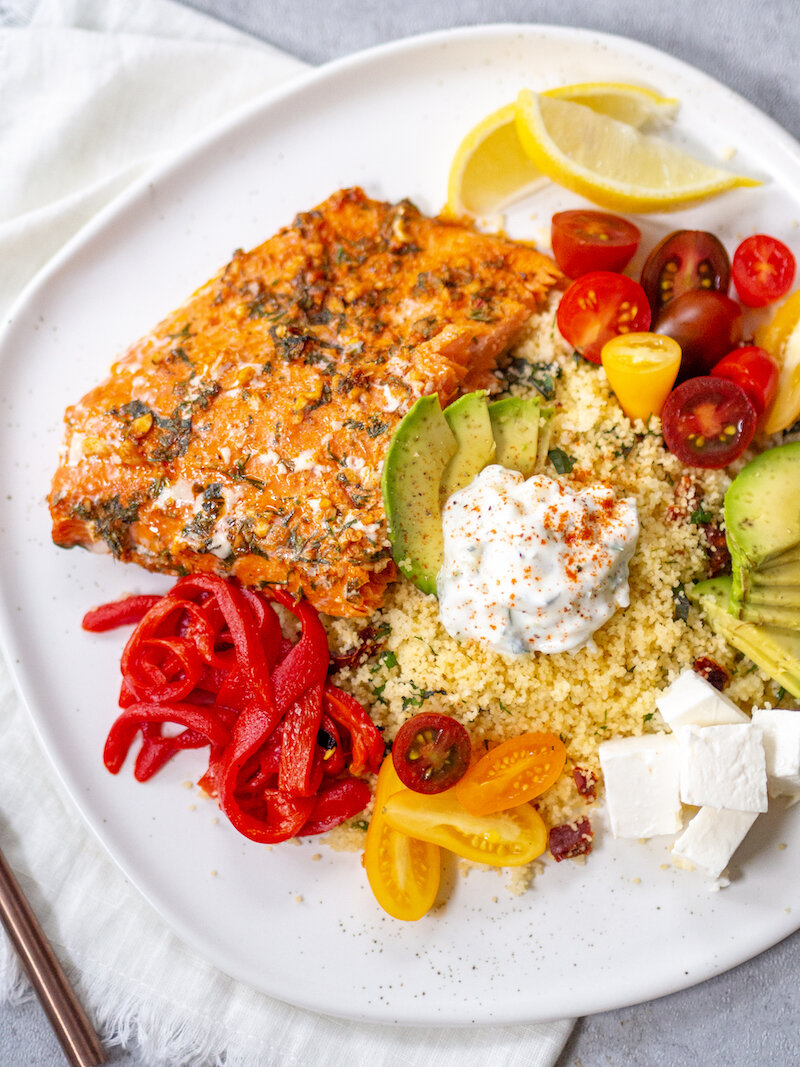 For marinade, I used a mixture of olive oil, lemon, dill, mint, oregano, paprika and lotsa garlic. Because the mix has lemon in it, you’ll want to marinade the fish rather quickly, not much longer than 10 minutes. We’re not making ceviche over here! Lemon juice denatures the proteins in fish, essentially “cooking” it. That said, since it’s a big chunk of salmon rather than the small pieces ceviche is cut into, you don’t have to worry too much. However if you leave it a bit too long the salmon might just be a little dry.

Make the Best Homemade Tzatziki for this Mediterranean Salmon Platter

Tzatziki is a creamy yogurt sauce/dip made by mixing Greek yogurt with cucumber, garlic, olive oil, herbs and a bit of lemon. I’ve tried lots of recipes for tzatziki before, but this one adapted from Modern Greek Cooking is my favorite because it uses a few tricks to keep it rich and creamy.

First, it’s essential to use a full fat Greek yogurt. Full fat (or at the very least, 2%) for creaminess and flavor, and Greek yogurt so that it stays thick and doesn’t get watered down.

Next, be sure to drain the cucumber by pressing the grated cucumber between paper towels to remove some of the liquid. Since cucumber is a watery vegetable, and the salt in the sauce will release its liquids, if you skip this step it will water down the tzatziki sauce.

Finally, make sure you press the garlic, or if you don’t have a garlic press, make sure you very finely mince it. There’s nothing worse than a chunk of raw garlic in your sauce! I know a lot of people like to make tzatziki with store bought roasted garlic puree, which is nice to have on hand.

Intermittent Fasting For Fatty Liver – Does It Help?

Am I Really Hungry? Physical Signs of Hunger to Look For